The Lockheed JetStar is the grandfather of today’s corporate jets. It was the first mass produced business jet, first flying in the late 1950s. Two prototypes for the aircraft were born in the famed “Skunk Works” at Lockheed’s Burbank, California plant under the supervision of aviation genius Kelly Johnson.   Designed to satisfy a government proposal for a small utility jet, the aircraft went from program approval to completed aircraft in only 241 days.   The government program dwindled, but Lockheed officials saw potential in the civilian market and pressed ahead.  Production of the aircraft took place at Lockheed’s Marietta, Georgia plant, where a total of 202 additional JetStars were built.

The United States military ordered 16 of the JetStars and gave them the designation C-140.  Several of the C-140s were used to test navigational aids and communications, but most were used for VIP transport as the VC-140.   All American presidents from John F. Kennedy to Ronald Reagan used the Air Force VC-140 version of the JetStar, with the plane flying under the call sign “Air Force One” when the Commander in Chief was on board.    Lyndon Johnson was especially fond of the aircraft as it was small enough to land directly at his ranch in Texas.  In addition to the U.S.A.F, many foreign governments, large corporations, celebrities, and wealthy individuals utilized the JetStar to travel with speed and comfort.

The JetStar (Serial #5048), on display at the Aviation History & Technology Center, was the 48th JetStar off the Lockheed assembly line in Marietta, GA.  It was built in 1964 and first purchased by the Union Carbide Corporation.   Later owners included country musician Kenny Rogers and Las Vegas star Wayne Newton.

As an icon of aviation, the JetStar quickly gained fame for its performance.  The famous aviator Jacqueline Cochran flew a JetStar named “Scarlett O’Hara” on a route from New Orleans to Bonn Germany on April 22, 1961.  She made stops in Boston, Gander, Shannon London, and Paris to set 18 world records along the way, including being the first woman to pilot a jet across the Atlantic. 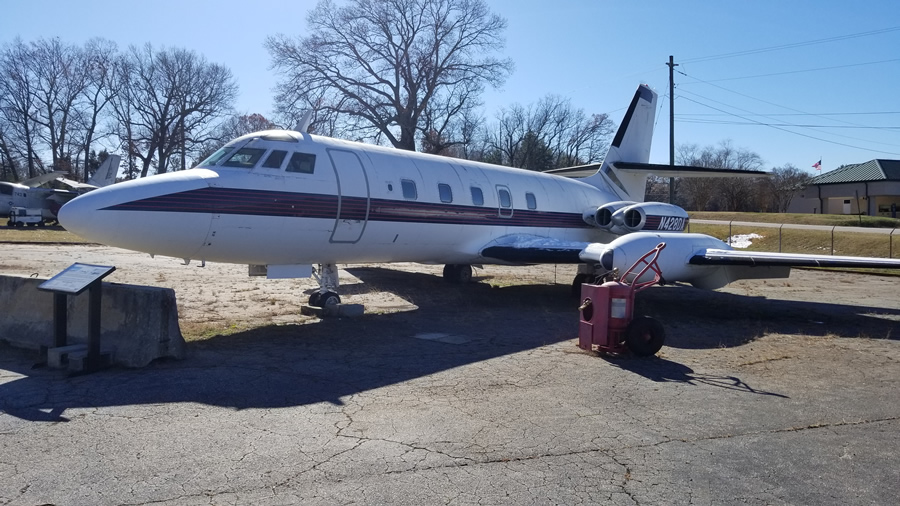